5 things you should know about the Balfour Declaration 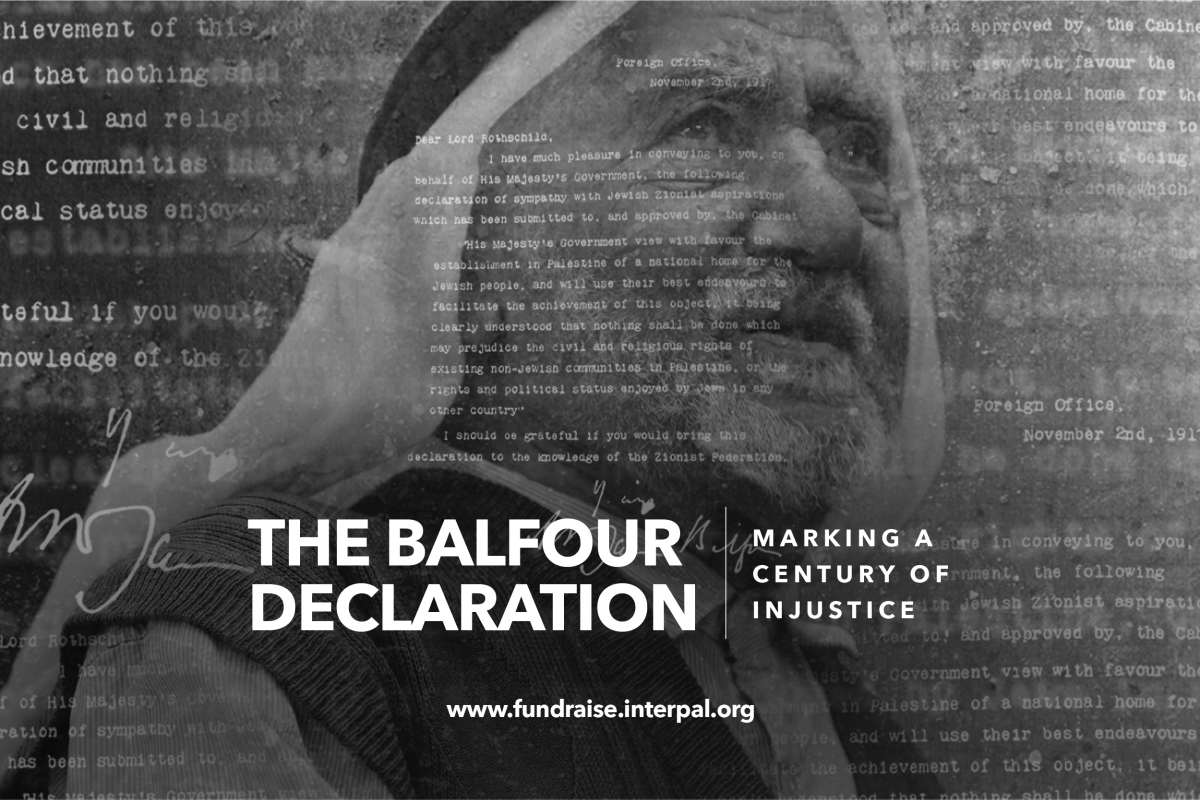 The Balfour Declaration was a statement in the form of a letter from the British Foreign Secretary Arthur Balfour to Lord Walter Rothschild, a leading figure in the British Zionist community, written on 2 November 1917.

The letter made it clear that the British government backed the establishment of a ‘national home for the Jewish people’ in Palestine. Three years later, in 1920, Britain was mandated to implement the resolution through the League of Nations. The letter marks a pivotal moment in the history of Palestine, laying the groundwork for decades of dispossession, conflict and displacement affecting millions of Palestinian lives.

It has now been 100 years since the Balfour Declaration was written, and its legacy continues.  Here are 5 things you should know:

Palestinians were not represented in the discussions that led to the issuance of the Balfour Declaration in 1917, nor were they cited by name in the letter. Rather, they were defined by what they are not (“non-Jewish”), which set the pattern for their “invisibility” in later official discussions about their future.

The entire text of the Balfour Declaration was included in the British Mandate for Palestine, which came into effect in 1923. Again, neither document mentioned the Palestinians by name.

The House of Lords voted overwhelmingly against the Balfour Declaration in 1922, by 60 to 29, declaring that the Mandate for Palestine was ‘inacceptable to this House, because it directly violates the pledges made by His Majesty’s Government to the people of Palestine” and was “opposed to the sentiments and wishes of the great majority of the people of Palestine”.

As Colonial Secretary, Winston Churchill overturned the vote in the House of Commons and the Mandate for Palestine was confirmed.

The Balfour Declaration paved the way for the creation of the Israeli state in 1948. In the run up to the “declaration of independence”, between 750,000 and 900,000 Palestinian men, women and children were driven out of their homeland by Jewish militias, and an estimated 500 villages and towns were depopulated and demolished. Approximately 15,000 Palestinians are said to have been killed in over 70 massacres committed by the militias during this time.

Palestinians refer to this as Al-Nakba, which means ‘catastrophe’.

Almost 70 years later, the displacement and dispossession of Palestinians continue, with more than 5 million registered Palestinian refugees still living in camps across the occupied Palestinian territories, Lebanon and Jordan, and in Syria.

In what was called the ‘Six Day War’ between Israel and neighbouring Arab nations in June 1967, over 300,000 Palestinians were expelled from their homes following Israel’s occupation of Palestinian territory. It has now been 50 years since the occupation of Gaza, the West Bank and East Jerusalem began.

The siege of the occupied Gaza Strip has also lasted ten years. Since 2007, Israel has blocked the free movement of people and goods in and out of Gaza while also controlling its air space and territorial waters. With the coastal enclave said to become unliveable by 2020, the people of Gaza are living a humanitarian catastrophe.

In the lead up to the centenary of the Balfour Declaration, you can help to raise awareness of its legacy of injustice.

Now is the time to call on the UK government to support Palestinians’ rights by taking action in response to Israel’s violations of international humanitarian law. Click here to send a letter to Foreign Secretary Boris Johnson or your local MP.